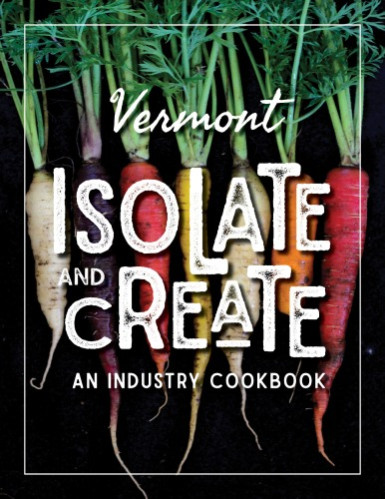 Ever wanted to cook a meal from a local restaurant in your own kitchen? Now you can! Released last Friday, the “Isolate and Create” digital cookbook features delicious recipes from 15 Vermont restaurants. All profits go to the Vermont component of the Restaurant Strong Fund, a national effort to provide grants to restaurant workers who have lost income due to the pandemic.

Creator Jenna Rice (of Jenna Rice Marketing), who runs her own business as a freelance photographer, web designer and graphic designer, was inspired after seeing a friend in Boston start a similar project. She reached out to local restaurants she knew for recipes and was connected to more across the state by the Vermont Fresh Network.

For help on the culinary side, she enlisted her sister, Nora Rice. Nora, who graduated last year from Ashburton Chefs Academy in the United Kingdom, had been working at the Herb Farm, a renowned restaurant in Woodinville in Washington State. Back in Hartland, Vermont to stay home and safe, the two teamed up to cook and photograph each dish.

The digital cookbook has been an immediate success, with over $2,000 earned already. “I was surprised just by how willing everyone was to contribute a recipe and how many people have purchased it so far,” Jenna said. “I think it shows that we live in a pretty special and giving, supportive, community.”

The Isolate and Create digital cookbook can be purchased for $20 and features delicious spring and summer recipes, desserts, and cocktails from restaurants, caterers, a distillery, a winery, and more! The e-cookbook includes Putney Mountain Spirits in Putney, Mad River Distillers in Waitsfield, Kate Wise Cocktails and Solstice at Spruce Peak in Stowe, Skunk Hollow Tavern and The Hartland Diner in Hartland, Public House Pub and Chef Brad’s Crazy Side in Quechee, Odyssey Events in Bridgewater, Michael’s On The Hill in Waterbury Center, Bistro de Margot in Burlington, Piecemeal Pies in White River Junction, Richmond Community Kitchen in Richmond, Artisan Eats Vermont in Windsor, and Let’s Pretend Catering in South Hero.

All profits go to the Vermont component of the Restaurant Strong Fund, a national effort to provide grants to restaurant workers who have lost income due to the pandemic.

Based on the article by Henry Allison for Vital Communities.